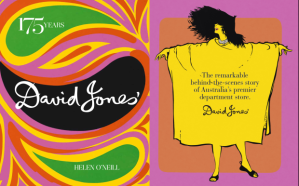 A BEAUTIFUL GIFT – A WONDERFUL READ! Described as the ‘biography of a department store’ by The Weekend Australian, as ‘fascinating reading’ by The Sydney Morning Herald, and as ‘illuminating’ by the Australian Financial Review, Helen O’Neill’s  David Jones’ 175 Years is the extensively illustrated history of an Australian icon.

A LIMITED NUMBER OF COPIES ARE AVAILABLE – email honeill@bigpond.com

Three months after David Jones’ 175 Years by Helen O’Neill (NewSouth Books), commissioned by the department store to celebrate its 175th anniversary, hit bookstores it was listed for The Nib: Waverley Library Award for Literature. ‘Anyone who’s interested in fashion, history, art and style will drool all over the pages of this gorgeous book’ wrote reviewer Hazel Philips in Idealog magazine.

This fascinating story dates back to the days when Welsh migrant David Jones opened his first Sydney store on 24 May 1838 and spans almost the entire history of modern colonial Australia. ‘It is like Downton Abbey with cash registers,’ says O’Neill. 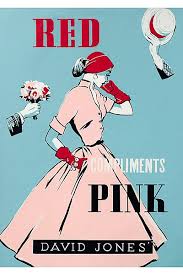 Alongside a compelling, personality-filled narrative this book features a rich display of beautiful design and photography, much of which is drawn from David Jones’ extensive archive and includes many items unseen for decades and more. A series of discoveries from other sources emerged during research, which would also be displayed in an exhibition held at David Jones’ flagship store in Elizabeth Street, Sydney.

These include a never-before-published collection of immaculate, original, hand-drawn and pencil-signed fashion sketches dating to the late 1940s by Norman Hartnell, couturier to the Queen. From another private collection came the diary of Mary Alice Shiell, the David Jones buyer who in 1948 travelled to Europe to woo the designer Christian Dior. Shiell’s success resulted in David Jones hosting the first complete Dior collection ever shown outside Paris – a significant moment in Australian fashion history.

O’Neill also explored the private archives of Max Dupain, the nation’s most famous photographer. Here she discovered a partner image to the iconic 1937 shot that Olive Cotton, a masterful photographer in her own right who would go on to marry Dupain, took of him while he snapped a David Jones model on the sand dunes of Cronulla.

As Cotton had photographed Dupain, Dupain had photographed Cotton but he kept his image private, in his own personal collection. These two photographs, which are believed never to have been seen together before, appear on pages 180-181 of O’Neill’s book.

Interest in David Jones’ 175 Years by Helen O’Neill began weeks before publication with news stories in The Sydney Morning Herald (among other Fairfax publications) and Vogue Australia online.

States NewSouth Books: ‘Everyone, it seems, has a story about David Jones … Featuring stunning fashion images and treasures from the store’s archives, this remarkable book also includes photographs from Max Dupain’s private collection and original sketches by Norman Hartnell, dressmaker to the Queen. In David Jones’ 175 Years Helen O’Neill uncovers countless secrets and hidden lives to reveal the extraordinary story of a shopping destination like no other.’