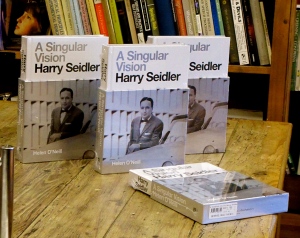 A Singular Vision: Harry Seidler, shortlisted for the 2015 National Biography Awards – Australia’s pre-eminent prize for biographical writing and memoir – tells the life story of the nation’s most remarkable and polarising modern architect.

In design and concept this stylish book – short-listed for the Australian Book Design Awards – is inspired by the architect’s own work. Within its handsome hardback cover lies the against-the-odds tale of an imprisoned child refugee whose single-minded determination resulted in him emerging as one of the most powerful creatives of his time.

A Singular Vision: Harry Seidler is a ‘wonderful biography [with] deeply personal perspective’ wrote The Australian Jewish News, praising its elegant design, inclusion of images by master photographer Max Dupain, and Helen O’Neill’s prose, which ‘like the photographs … is sharp and illuminating’. ‘O’Neill has breathed fresh life into Seidler’s legacy … [this book] has ample appeal for both the architecture world and general readers.’

Observed modern architecture expert Professor Philip Goad in Australian Book Review: ‘With unparalleled access to photo albums, diaries, and personal papers, Seidler’s full life and intimate family details are revealed’. ‘O’Neill’s book deftly brings together [the] two sides of Seidler – the personal and professional – in a way that makes the book’s main protagonist more human and more flawed but at the same time, admirable and formidable.’

The National Biography Award Judges’ Comments reads as follows: ‘This resonant, entertaining and important biography recounts the life of the Vienna-born architect whose obsessive dedication to modernism had such a profound effect on Australian cities.

‘Helen O’Neill describes Seidler’s flight from Nazi Germany, his years in both Canada and the United States, and his unlikely settling in Australia, where his parents had migrated.

‘This is a respectful and careful biography, but O’Neill also provides much information about Seidler’s controversial opinions and ruthless drive. We get a vivid picture of the architect as he engaged so passionately in often acrimonious battles about the built landscape, particularly of Sydney. O’Neill writes compassionately and with discretion about this great figure, and while the writer had access to family papers, she does not resile from describing difficult episodes with clarity.

‘Seidler comes to life in this biography, and we begin to understand his strong personality through the descriptions of the work he created. He was an authoritarian personality who was unbending in some ways, as was some of his important work in concrete. This is an important work that provides a strong basis for discussion about built environments and their uses. It’s also an impressive portrait of a singular human being.’

Edmund Capon, former director of the Art Gallery of NSW, launched A Singular Vision: Harry Seidler at a gala event held in the Seidler Penthouse at Milsons Point, Sydney.

Days later, O’Neill revealed that research for this book had resulted in the unearthing of a magnificent portfolio of images by renowned photographer Max Dupain. The inside story, written by O’Neill for The Australian Financial Review, gives a glimpse of these beautiful images, which are featured in A Singular Vision: Harry Seidler, and their context – the unique relationship between Harry Seidler and Max Dupain. A subsequent exhibition including these photographs was held at the Art Gallery of NSW.